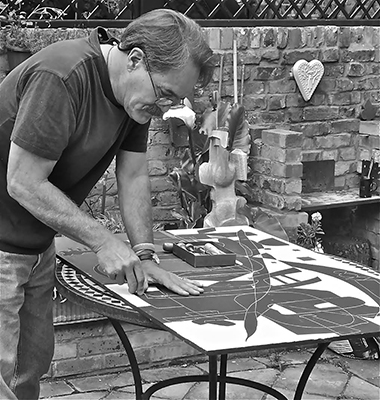 Minton’s instruction began early — an art-literate mother who started him looking at art before he could read, a great-grandfather who whittled wood on the front porch. And then there were the houses he built—each one a lesson in balance, proportion and the integrity of material. Formal training was not neglected, and time with Silverio Paoli in Petrasanta, Italy, carving marble was added.

The sculptor’s most important ingredients, however, were not technical. They were the artist’s sensitivity to dream, to spirit… and the whispers of long-dead artists from cultural traditions worldwide. Minton was a willing vessel, taking in impressions, visions and ideas from his own meditative practices, his multicultural background (he is of Asian /Hawaiian /English descent), from studies in Japanese art, from the Western Art History of which he is a voracious student, from Native American Art (he has had a studio in New Mexico for many years) and then synthesizing them in carefully balanced compositions.

When we look at Kimo Minton’s beautifully sculpted panels today, we see artwork that strikes us as simultaneously ancient and modern, as both familiar and foreign. It is these kinds of complexities that makes art—and an artist—endure over time.

“In carpentry, as in art, you have to show up – everyday. Carpentry is about balance, proportion and patience. It teaches you the ways a piece of wood can fight or surprise you.”

“The air in the morning in the high desert is soft and fresh and the lack of humidity causes everything to have a crystalline quality. From a high spot in New Mexico it feels like you can see the entire state; this gives you an unbelievable, soaring sense of freedom. I love the ever-present mountains and the rock formations. They look so improbable, so sculptural, because the land is being scoured and carved all the time.”

“I have been creating a temple in my head forever, even though I have no dogma and come from two very different religious traditions. I’ve always been trying to figure out god’s enigmatic moves, all the while hoping there is a use for me in all that.”