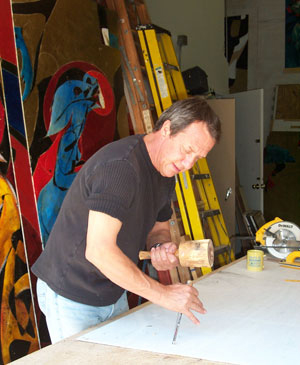 In the Jura mountain region of France, the Gaugy family have been artists for generations. Jean-Claude Gaugy entered the world and this tradition in 1944. At age five he began his apprenticeship, drawing daily and working in the family foundry. At fourteen he left for Paris, doing portraits first in cafés and later in an exclusive club. There, Salvador Dali discovered him and sponsored his first Paris gallery show and helped him gain him early entrance to École des Beaux Arts as a sculpture student. A place in a group show at Paris’ Museum of Modern Art earned him a purchase by the Soviet Government of all three of Gaugy’s works in the show, a trip by consular jet to Moscow and St. Petersburg and his first museum installations.

Returning to Paris, Gaugy immersed himself in the art world, sharing a studio with Bernard Buffet, meeting Picasso, continuing to paint and study. He studied at Académie Julien and Académie du Feu in Paris, the School of Design in Rome. School of Woodcarving in Oberammergau, Germany, and School of Sculpture in Moscow. He went to England for an apprenticeship with Henry Moore, which he describes a “months covered in plaster”. Then a new reality intervened when he was drafted into the French Marines, spending eighteen months in Africa in fierce combat. Gaugy will not talk about this period, but his time spent healing both in a hospital and a monastery indicate how deeply this affected the young and sensitive artist.

.In 1996, seeking both greater freedom and artistic stimulation, Gaugy decided to immigrate to the United States. However, upon arrival he discovered only limited public interest in sculpture. Needing to sculpt, unwilling to paint, he began the development of his signature medium of wall hung paintings carved into wood. Gaugy’s next twenty years were spent exploring the limits of that medium, working realistically, practicing his craft. He generally ignored the conventional art establishment, preferring to work and sell from his studio, where he created major murals for libraries, churches and synagogues, as well as having work purchased by major corporations and individuals. Throughout, he persisted in the evolution of his “carved paintings”, ceaselessly fascinated by the challenge of breaking new ground, of moving ancient craft into contemporary art.

At age forty, Gaugy felt that he, his message and his medium had all developed sufficiently to seek broader recognition. He ceased creating representational imagery; began working in his mature style and commenced gallery representation. He returned to France and had shows in his native region as well as the Musée du Luxembourg in Paris. He completed man murals, some as long as 50 feet, for groups as diverse as the First Interstate Bank Tower in Las Vegas and the National Foundation for Depressive Illnesses, whose 30 foot long work was unveiled in Washington, D.C., at the National Building Museum in 1991. A variety of museums included his work in their permanent collections and his reputation as the father of Linear Expressionism began to grow.

In 1994, the Government of Luxembourg proudly sponsored an exhibit of 150 of Gaugy’s works, including two forty-foot murals. Artists in other media have honored him by writing dance pieces and musical compositions based on his paintings, and in 1998 he had a major mural installed at Columbia Medical Center in New York. In the early 90s, in addition to his regular work, Gaugy began creating his “magnum opus” – a carved work of spiritual themes almost 11,000 square feet in surface area. It has been called “a Sistine Chapel in a contemporary idiom”. Completed in 2002, it was installed as a meditative space in Santa Fe, NM and held open until 2007 to great acclaim. Noted choreographer Christopher Fleming wrote a full-length ballet about this monumental work and performed it in the space to a full house.

Headquartered in the Southwest and shown in galleries worldwide, Gaugy daily advances his commitments to his beloved wood and to his continued learning. His technical skill and open heart expand with every caring, and as we watch, the honesty of his work allows us to travel awhile with him on this expressive journey of the human spirit.

“Everything I do, I have to become it. There’s no thought; you try to get yourself out of the way when you’re painting, and watch things happen.”

“I am a communicator, working with a visual language of symbols and colors and textures. My job is to refresh this language, so people can use it today to access deeper aspects of themselves.”

“There is only one painting I’m interested in – the last one I do before I die.”

Owners and collectors of Jean-Claude Gaugy include:-